Carrots and berries and kale, oh my!

A couple weeks ago, the hubby and I watched a movie about two guys who lost a ton of weight and "got healthy" just by drinking juice from fruits & veggies.  This "juice fast" was all they consumed for 60-days or longer.  They were observed by doctors throughout that time and had blood tests measure important hormone/body chemical levels.  One guy, who started out at almost 430-pounds, dropped his weight by about 200# while simultaneously, getting off a bunch of the meds he was on for various health issues.

The movie was interesting... a bit infomercially (selling the juicer and the book), but it had one point that that really hit home for us...

Raw vegetables are good for you.

That said, neither of us feel we get enough veggies in our diet.  We try, but sometimes we just don't try hard enough.  And we don't eat poorly (I can't tell you the last time we ate at one of the major fast-food places - it has to be close to 10-years), but could we be healthier if we tried to follow the "Strive for 5" lifestyle?

Then we asked the question... should we get a juice extractor and have a veggie-smoothie every day?

I posed this question to my friends on FaceBook.

For the most part, the response was the same... too expensive, too much work.

Veggies ARE more expensive than junk food.  If I make this a priority for me, and my health, then I should be able to make it work.  Right?

Too much work?  I don't know.  I didn't have a juicer at that time, so I had no idea what if would be like to process fruits & veggies and then clean up the machine.  Yes, I'm sure it's more work than buying pre-made juice, but it can't be that much less work than cooking up a veggie for dinner.

Long-story-short, I really wanted to try juicing.  When talking with a friend, I found out that she had one that she never used and would be happy to give it to me.  HOORAY!  Now I can "try it before I buy it" (which is awesome, because my research has shown that a decent juicer costs about $200.)

And try it, we did... I went to my local Farmers Market & grocery story and bought Kale, Cucumbers, Apples, Grapes, Carrots, Lemons, Limes, Oranges, Celery, Broccoli, Beets, and Blueberries.  Each day (for the last 4 days) we've taken a mixture of these things and made juice out of them.  We spent a little over $50 on fruits and veggies, I estimate it should last the two of us about a week. 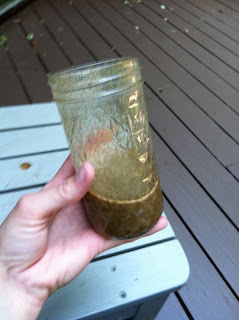 Yeah, it looks terrible... swamp green in color.
And yeah, Kale tastes a bit like grass, but it's REALLY good for you (lots of micro-nutrients) and mixed with other stuff, you don't notice it as much as you would if you ate it alone.

Clean-up, too, is easy!  The machine comes apart, you pull out the "pulp" and rinse the components.  That's it.  Leave it on the counter to dry, and you're ready to go the next morning.

So, we're going to keep trying this and see what happens.
Will we feel healthier?  Will we have more energy? Will we lose any weight?
I don't know.

All I know is that I'm taking a step in the right direction to put more nutrient-dense foods in my body... and that's the point, isn't it?

Do you juice?  Got a favorite recipe?  I'd love any feedback you'd like to share.
Posted by Jill at 9:45 AM 2 comments: 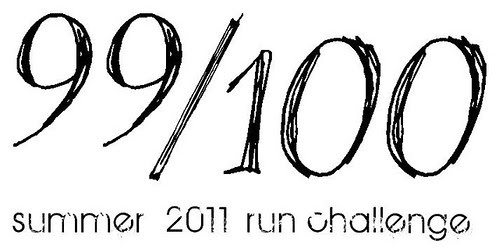 Today's 12-of-12 is being renamed to....
"My Summer Vacation"
It was a day filled with summertime activities.
It started out with...
CHERRIES!

This morning I made Cherry-Almond Jam...
Next... Cherry Pie!
Mid-day, I took time to relax.
Finally, it was time to burn some calories...
If it was a little earlier, I'd grab a piece of pie to celebrate burning 500+ calories over my 16.1 miles of riding, but since I'm trying to lose a little weight, I'll save those calories for another time.
If you'd like to learn more about the 12-of-12 project, visit Chad Darnell's page.  He's the one who started it all - there you'll find other 12-of-12ers from around the world, too.
Hope you're having a great summer.  See ya next month!
Posted by Jill at 9:40 PM 10 comments:

I can't believe it's been a week since the Triathlon.  Time really flies in the summer time.

Well... there was that little holiday in there, too.  Hope you had a fun 4th of July - celebrating your independence in your favorite way.  I did.  We spent two days in Zoar Valley, NY... walking in the woods and swimming in the creek. 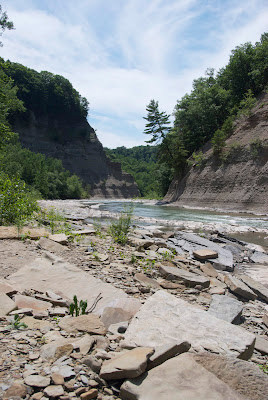 Since I created my Activity Tracker (found on the sidebar on the right), you don't really need a daily account of my swim-bike-run training.  Besides... I didn't think I'd be "training" after last weekend... but my hubby and friends talked me into completing a 2nd Tri this summer - Big day #2 is August 27th.  This one is exactly the same as last weekend's tri, just in a slightly different location (we can almost say it's "down the street" from the 1st one). 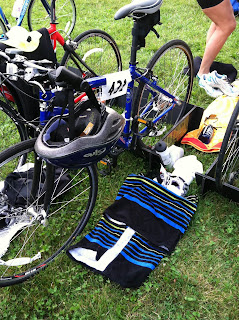 I was thinking about doing a Tri in Massachusetts... but I decided against it... mainly out of selfishness.  I'm going to visit Elizabeth (and family) at the end of July (barring any drastic schedule changes), and instead of having to go to bed early, leave the house early, then be exhausted for the remainder of my visit, I'll just go and watch the event.  Maybe.  I'd much rather hang out with my pals than worry about swimming in the ocean or my transition times or, or... anything else.

Speaking of Elizabeth... she's the one who started the 99/100 Challenge.  I'm happy to say that I'm perfectly on track to finish the challenge by Labor Day.  Today is Day 41 of the challenge and I've logged 43.7 run-miles thus far.  HOORAY!

I expect I'll be even further ahead of schedule over the next couple weeks since my run training has stepped up a bit.  You see, I didn't love my performance during the run part of the July 2nd Tri.  Granted, it was hot and humid, but I don't think that was why I didn't blast thru the run.  It was mental.  I was dreading the run... something I thought I was over.

So, my focus in July is to get "really good" at running... improve my speed, improve my distances, improve my overall attitude toward the sport.  I think I have the fundamentals (form, cadence, etc)... now I just have to get my head right.

I can do this.
I will do this.

I don't have much more to report... so, here are a few shots from the event... special thanks to my mom, photographer extraordinaire! 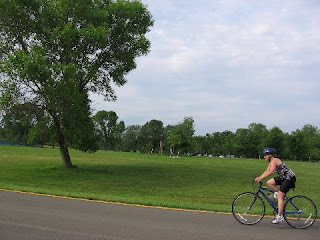 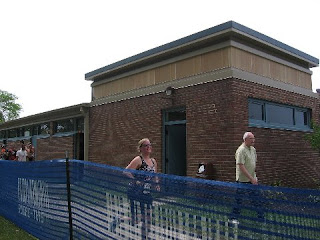 Oh my gosh... it's the first Tuesday in July!
It's Turn the Page... Tuesday with Adrienne!

It was a mish-mosh month of reading... two books that probably couldn't be more different.  The first was a recommendation from a Book Club buddy, the other from my hubby - a sci-fi guy.   Tho very different, the social commentary from both authors was quite thought provoking.

I didn't know this was "historical fiction" when I started reading.  How pleasantly surprised I was when I found out.  I found the story interesting, albeit a bit depressing at times. How hard it must have been for these scientific women who lived in a time when social class and gender were such limiting factors.  Tho I don't know how much of the "relationship" side of the story keeps to reality, I get a sense that it's probably pretty close.  I can imagine the challenges the "old spinster" and "young working class girl" face when dealing with their need for love and affection, again, in a world that makes it so difficult to find (or act upon) love.

Here is a summary from Tracy Chevalier's website:
In 1810, a sister and brother uncover the fossilized skull of an unknown animal in the cliffs on the south coast of England. With its long snout and prominent teeth, it might be a crocodile – except that it has a huge, bulbous eye.
Remarkable Creatures is the story of Mary Anning, who has a talent for finding fossils, and whose discovery of ancient marine reptiles such as that ichthyosaur shakes the scientific community and leads to new ways of thinking about the creation of the world.
Working in an arena dominated by middle-class men, however, Mary finds herself out of step with her working-class background. In danger of being an outcast in her community, she takes solace in an unlikely friendship with Elizabeth Philpot, a prickly London spinster with her own passion for fossils.
The strong bond between Mary and Elizabeth sees them through struggles with poverty, rivalry and ostracism, as well as the physical dangers of their chosen obsession. It reminds us that friendship can outlast storms and landslides, anger and and jealousy.

Neuromancer by William Gibson
I believe this is the first "Cyberpunk" novel I've ever read.  Written in 1984, the year of the story is uncertain.  There's been a big war (WW III?) and technology is everywhere and in everything.  People are "jacked in" to the Matrix and have the ability to buy tech-implants and enhancements to their bodies and minds.  Computers are an essential part of daily living - and in this story, there are two AIs (Artificial Intelligences) that need an intervention.

Imagine movies like The Terminator, Blade Runner, The Matrix, and Escape from New York (if you're not into the Cyberpunk genre), this will give you a feel for what Gibson's world of Neuromancer & The Sprawl is like.  Interesting possibilities for the future, if you ask me.

Case was the hottest computer cowboy cruising the information superhighway--jacking his consciousness into cyberspace, soaring through tactile lattices of data and logic, rustling encoded secrets for anyone with the money to buy his skills. Then he double-crossed the wrong people, who caught up with him in a big way--and burned the talent out of his brain, micron by micron. Banished from cyberspace, trapped in the meat of his physical body, Case courted death in the high-tech underworld. Until a shadowy conspiracy offered him a second chance--and a cure--for a price....

BTW - Gibson, from what I understand, is credited with coining the word "cyberspace" - which shows how influential his stories have been in the technology world.

I'm in the middle of "Count Zero," the second novel of Gibson's Cyberpunk trilogy right now.  It's loosely connected to Neuromancer.  We'll see if there's more as I get further along in the story.

Thanks for visiting! Hope you enjoy your stay. Please do not use my images or content without permission. Thanks.

Choose your own adventure