Can it be true?  Am I actually getting the hang of this running stuff?  Here's the story.

About a month and a half ago I started on my quest to run a 5k (the length of final leg of the "sprint" triathlon I'm doing in July).

Two times a week for almost 2-months now, I've plodded around the course, not feeling very runner-like.  There were days in which I was downright miserable.  But I kept going.

Last week I had a breakthrough.  Then it  happened again TODAY!

During last Thursday's run I was without my iPod.  The hubby was running with me.
A little side note about the hubby... he's a natural runner - tall and sleek - he could run a 5K tomorrow if he wanted to.  He's also much, much faster than me.
So we're running last week.  Poor hubby is practically walking to as not out-distance me.  Finally, I tell him to run ahead... I'll catch up (or, I'll meet him at home).  After a bit of argument, he finally acquiesced to my request and ran off.

That's when I decided to run for 2-minutes, then walk 2 - a modified week two of Couch to 5K.

The first set was 3 minutes long.  Then I walked.  Then ran again for FIVE minutes.  Then a walk.  Then 4 more running minutes.

Most importantly.  I FELT GOOD!  I felt strong, like I could run even longer and not be in pain.

I finally think I'm getting the hang of it.
Finally.

Now it's time for a well-deserved rest.
Good night!
Posted by Jill at 8:08 PM 1 comment:

Today's visitor.
Peeking in my back door,
hoping I'll refill the bird feeders. 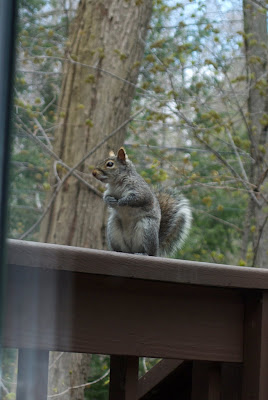 To everyone who has encouraged me...
inspired me...
and kicked my butt into gear...
THANK YOU!
Posted by Jill at 9:03 PM No comments:

We have some new "neighbors" in the area... BEAVERS!  Tho I haven't seen them yet, I have seen their handy-work.  I've been told they can take down trees like this in about 5 minutes.

LOTS of errands to run today during lunch time.  First... a trip to the doctors to get my Tetnus vaccine and PPD test.  Not fun, but I hafta get it done (for work).

This was fun... down the road from the doctor's is my favorite 'Animal' store to get food and treats for the kids.  Gus, the owners hound dog, wasn't in today, so no puppy fix during my visit.

Errands done & had about 10 minutes before I had to visit my next customer, so I stopped at this nice spot for lunch.

The Bug checks out the goodies I bought home for him & Mackie.  They approve!

Time for a quick walk before puppy dinner & then off to swimming.

While the kids eat, I have a chance to take a peek at my three new (loaner) books!  I can't decide which one to read first... might just dive into all three at once.  :P'''

Random photo time!
This weekend the snake (Tsunami - our 9-plus foot Jungle Carpet Python) sloughed her skin (she shed).  It's an amazing thing to watch if you haven't seen it before.  She did a great job... only one tear in the whole thing.  Here she is smiling at you:

Here's a view the whole thing.  You will notice, the skin is inside out... it is pealed off like one lonnnnng sock.

When I went outside to take my "View from the Porch" photo, I couldn't help notice my Hostas... peeking out of the ground.  I LOVE all the new growth in spring.

Finally... it's off to the pool.  I haven't calculated my distance yet, but it was probably close to a mile (I hope so, at least).

The View from the Porch:
What a difference a month makes!  This shot has looked virtually identical the last two months (snow and snow)... but not today!  We've have temps in the 60s, 70s, and 80s these last few weeks so the snow is gone and the plants are poppin!  The crocuses emerged and faded in March - now the lilies, hosta, and all things green are starting to grow.  HOORAY!

March was full of more random reading - fiction, non-fiction, sports...  but one thing you'll notice is missing is Sookie.  I actually did it - one whole month without her & her vampires.  Crazy, isn't it?

Before I get too carried away with my book stuff... make sure you visit Some of a Kind for more TTP...T info and to see what others are reading.  Thanks, Adrienne, for this excellent idea!

Trizophrenia:  Inside the Minds of a Triathlete by Jef Mallett

Your First Triathlon by Joe Friel

As you can guess, these are books to help me in my preparations for my first triathlon coming up on July 3rd.  I won't bore you with the details of the books - but suffice it to say... I read them at the same time, and what a perfect combination.  Serious training info (YFT) with a lot of comic relief (T:ItMoaT).


My world has kind of become this mix of preparation and folly since I signed up for the event.  I'm trying to make my preparations fun and exciting - even tho there are days I feel my lungs are going to burn up or I wonder where this "mystery pain" came from.  I'm a little less than three months from the event... panic and pride are common emotions for me lately.
It's all good! 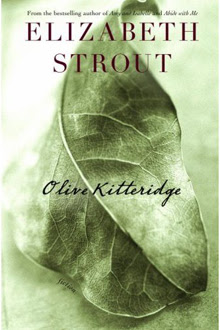 Olive Kitterage by Elizabeth Strout
This is my Book Club's selection for our April meeting.  I'm giving it a 3.5 (out of 5).
At first, I really disliked Olive.  She seemed callous & rude, self-centered with a total lack of empathy.  But she grew on me, tho I never loved her.  I don't think she was meant to be the most beloved character in the story - there were plenty of others who instantly drew your affection.
I didn't know before I read the book that it's set up as a series of short stories (not necessarily ALL about Olive).  However, the characters created a "fabric" of sorts - people with intertwined lives showing different sides of their personalities depending on who they were with.  Olive is definitely the center of this tapestry.
A nice story about life... and the people who live it.

Woodswoman: Living Alone in the Adirondack Wilderness by Anne LaBastille
I've only just started this book.  My husband bought it for me during one of our trips to the Library Book Sale (he knows I'm into books about strong, independent women).  This is Anne's account of her life as a newly divorced woman who sets out to make a life of her own in a self-built cabin the Adirondacks.  So far, she's built her house (and moved it due to a zoning issue) and is about to settle in.  This is real rustic living and I can't wait to read more.
There are two more installments of this autobiographical story... we'll see if I can find them, too.
You can do whatever you put your mind to!

Catcher in the Rye by JD Salinger
I picked this book up over the weekend; I was "between" books and wanted something short.  Like Woodswoman, I've only just begun Catcher so I can't comment on it yet except that Holden Caulfield seems like quite a character.  I've heard the book has been banned in some places, so I'm very curious to find out why.  I guess I'll learn soon enough.

Well, that's it for this month.  Unfortunately, I won't be able to participate next month - I won't have access to a computer till around the 8th of May... but I'll be sure to stop by to see what everyone else is up to when I'm back online.

Enjoy your spring wherever you are!  Happy reading.
Posted by Jill at 7:08 AM 5 comments:

Last night, while getting ready to watch a movie, my hubby noticed this little guy sitting on our window: 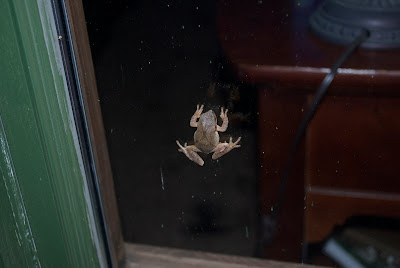 He's a Spring Peeper; and he and his relatives have been singing away for the past few days, hoping to find mates.  There must be hundreds of them out in our neighbor's pond, because their sound is deafening (okay, maybe that's an overstatement... but they're pretty loud).
Click here to hear what they sound like (thanks Wikipedia).

In the six years we've lived here, I don't think I've seen one of these little guys in the flesh.  Kinda cool that he (she?) paid us a visit.  Spring is definitely here!
Posted by Jill at 9:57 AM 1 comment:

The lawn needs a little TLC,
but the crocuses have made it SO pretty!
HAPPY SPRING! 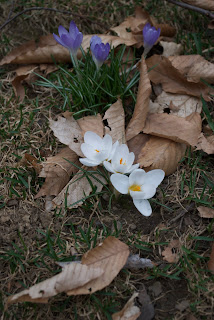 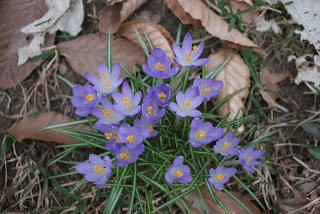 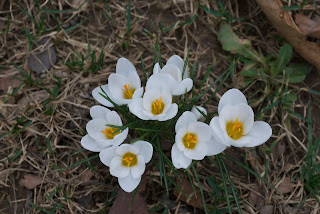 Thanks for visiting! Hope you enjoy your stay. Please do not use my images or content without permission. Thanks.

Choose your own adventure